You’ve detected a target. Excitedly, you start digging, but you can’t see any metal. You scan over the area again with the detector and it’s still bleeping, but there’s no luck in finding the treasure.

It’s likely that we’ve all faced this situation, and it leaves us feeling frustrated. What could be the answer to this problem? The answer is quite simple actually, what you need is a metal detecting pinpointer. These nifty little machines are extremely useful for hunting out those hidden metals and are generally very easy to use.

Who should use a Pinpointer metal detector?

I suggest that all metal detecting enthusiasts should own a metal detecting pointer. I’ve found that when I go out metal detecting, bending down to sift out sand beneath my fingers is a very cumbersome task, especially if the metallic object is very small. Using a pinpointer will make your life so much easier, it will help you to locate your targets swiftly and it will save you time and effort in the process.

1. The Garrett Pro-Pointer AT Pinpointer

Coming in at No.1 is the Garrett Pro Pointer AT Pinpointer.

Affectionately known as ‘The Carrot’, the Pro-Pointer AT Pinpointer is a favourite for many keen detectorists. This pinpointer/metal detector is manufactured in the USA by the tech giant, Garrett, who provide an impressive range of pinpoint metal detector’s and various handheld pinpointers.

What are the Main Features of the Garrett Pro-Pointer AT Pinpointer? 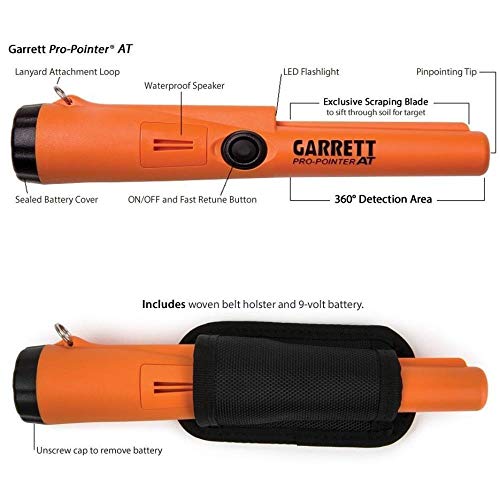 Being bright orange and about 23cm long, I can understand why the Pro Pointer AT Pinpointer is called ‘The Carrot’. One thing that is apparent, is you definitely won’t lose this metal detector pinpointer very easily.

Powered by a 9 volt battery (AA batteries can also be used), the Pro Pointer should give the user around 30 hours of battery life. Batteries are included with some purchases.

Also included on the Pinpointer body are, a Lanyard Attachment Loop, a Waterproof Speaker, an LED Flashlight, a Scraping Blade, a Pinpointing Tip, a 360 Degree detection area, Power/Retune Button, a Sealed Battery cover, as well as a ruler etched into one side and a woven belt holster.

I can see it’s a clearly well thought out product, and quite lightweight also, it’s definitely built to last with it’s sturdy exterior casing and the woven belt holster is a nice touch. 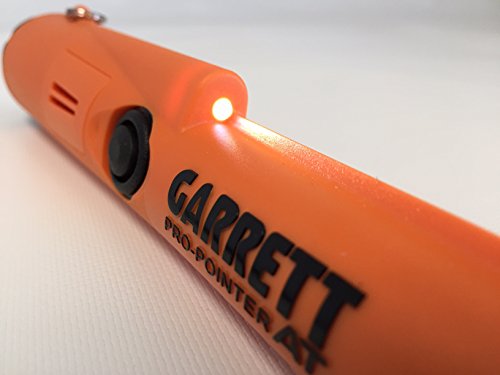 Each pin pointer is provided with an instruction manual, but here’s a quick review on how to use their Pro Pointer.

These controls are relatively easy to use and the adjustable sensitivity is a great factor. I think it will take a little bit of practice to understand them fully though.

What are the Pros and Cons of the Garrett Pro-Pointer AT Pinpointer? 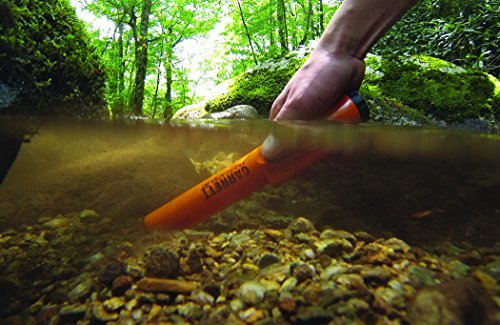 It’s not hard to see why the Pro Pointer AT is our top pick. It is tailored for all users, and I believe it to be a durable and quality made item. Everyone who uses this product will be impressed by its abilities and we couldn’t recommend it more highly than it already has been. 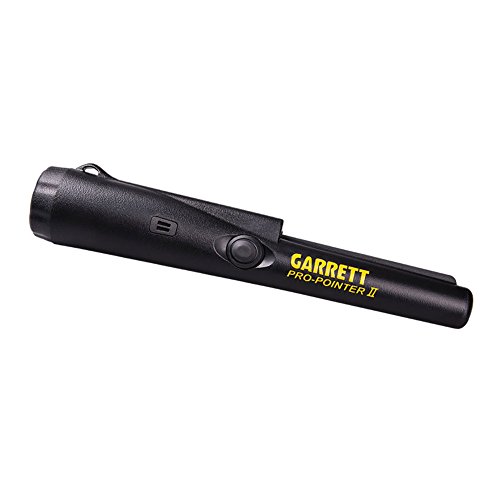 Coming in at No.2 is another pinpointer from Garrett. Which is hardly surprising when you consider the fact they’re pretty much the best brand to go to when it comes to metal detecting. The Pro Pointer Mark II is the newer pinpointer model, it was preceded by our top pick today but that doesn’t mean it hasn’t got its own advantages.

What are the Main Features of the Garrett Pro-Pointer II Pinpointer?

I much prefer the way the Pro Pointer Mark II looks compared with the Pro Pointer AT, but this being said, I could probably misplace it and wonder where it’s gone, unlike its orange counterpart. It is also 23cm long, but 32 grams lighter, which can make a lot of difference in a handheld gadget.

The Pro Pointer II is powered by a 9 volt battery which can provide the user with up to 30 hours of battery life. And it too can operate in temperatures of -37 Degrees Celsius to 70 Degrees Celsius.

Like the Pro Pointer AT, the Mark II includes: A Lanyard Attachment Loop, a Scraping Blade to sift through soil with ease, an LED light, a Battery cover, a 360 Degree Detection Area, a Pinpoint Detection Tip and a Single Button to operate the device.

Garrett have endeavoured to make this pinpointer metal detector even more practical than the Pro Pointer AT. I can see where they’ve done away with complicated button pressing functions but also where they’ve kept a lot of the Pro Pointer AT’s redeeming qualities. It leaves me a little underwhelmed, as I believe adding a few more functions could have improved the Mark II. 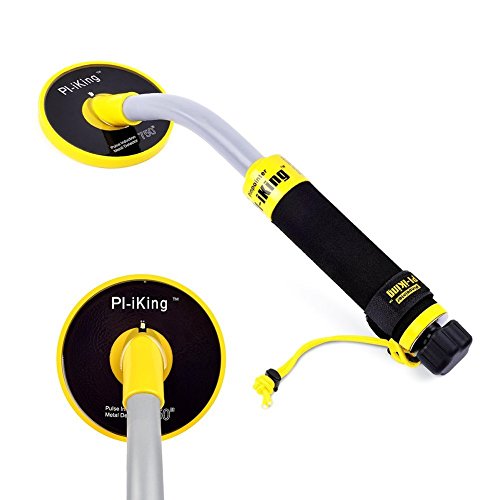 When it comes to using the Pro Pointer II, it’s so simple, a child could operate it. The only button you have to press is the Power Button.

To Power On, press and release the power button, whilst holding the detector away from any metallic objects. The user will hear 2 beeps and the LED light will remain on.

To Power Off, press and release the power button to power off. The pin pointer will emit a single beep during its power down.

Obviously, it came as a surprise to me that these were the only operating functions. Much like the Pro Pointer AT I thought at least some adjustable sensitivity or sound controls would be included, but there isn’t. Which I applaud Garrett for, their bravery in delivering something so robust but without too much technology is astonishing.

It will appeal to customers who don’t like the hassle of clicking a button a gazillion times, but maybe less so to those who are hard core detectorists.

What are the Pros and Cons of the Garrett Pro-Pointer II Pinpointer? 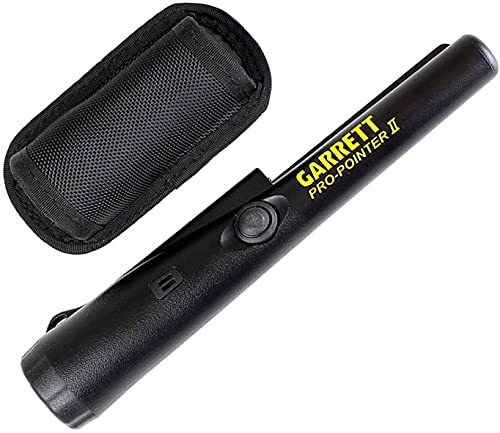 Whilst it isn’t the best pinpointer, the Pro Pointer II isn’t too far behind. A few improvements might have even pushed it to the top spot. What I will say about it is that it would make a fantastic land pinpointer metal detector, one you could let your child use and it will continue to benefit all users who purchase it.

At No.3 is the TOPQSC Underwater Pinpointer, also known as the PI-iking 750. Although not much is known about the manufacturers, this pinpointer has gained a lot of recognition for its ease of use and customer satisfaction.

The TOPQSC Underwater Pinpointer is more suited to a beginner, with parents even buying this model for their children to enjoy. This being said, many adults have benefitted from its impressive detecting skills. 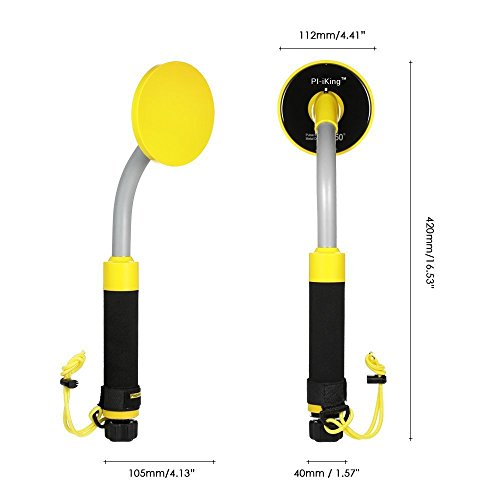 What are the Main Features of the TOPQSC Underwater Metal Detector Pinpointer? 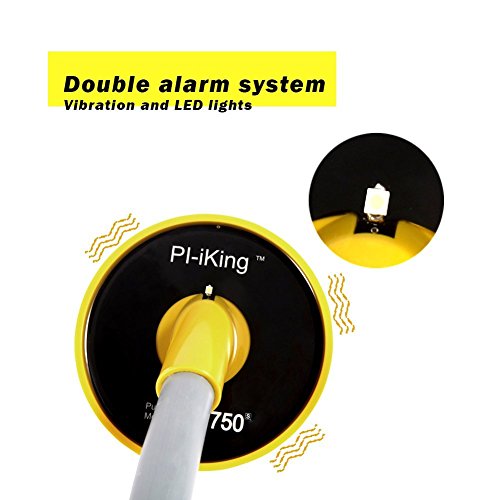 My first impressions of the TOPQSC Pinpointer was that it looked like a fuel pump stuck in a hub cap, its exterior though, is fashioned to look like a smaller version of a metal detector and the colours of it are black and yellow with a silver stem.

TOPQSC’s pinpointer is longer (43cm) and heavier (1lb) than our previous pinpointer metal detectors, but that doesn’t affect its usage.

Like our other best pinpointers, power comes from a 9 volt battery which should last the users many hours of metal hunting on the land or in the water. A pinpointer is always best used in conjunction with a metal detector for accuracy and better coverage.

A holster and a wrist strap are included, these are a nice addition and will come in handy when taking the pinpointer out for a spin. Overall, it’s a sweet little device that I’m sure would suit an array of metal detecting needs. 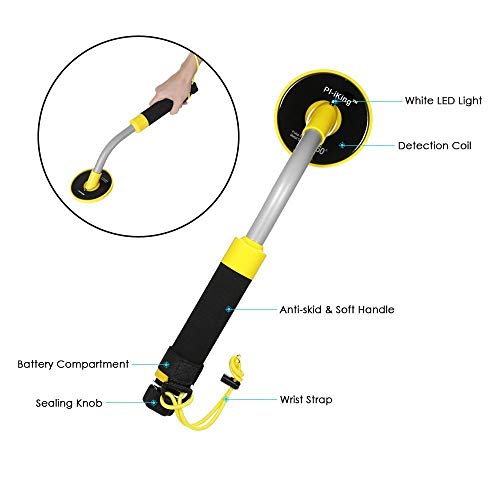 The functions of the TOPQSC Underwater Metal Detector Pinpointer are quite easy to understand. Below we’ll review the main controls:

These simple controls are fantastic and won’t leave you scratching your head in confusion. 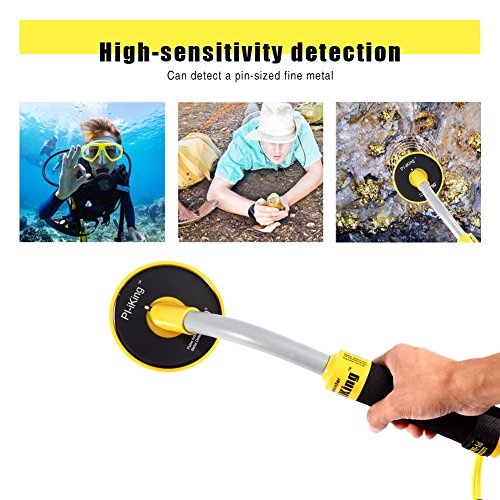 What are the Pros and Cons of the TOPQSC Underwater Metal Detector Pinpointer? 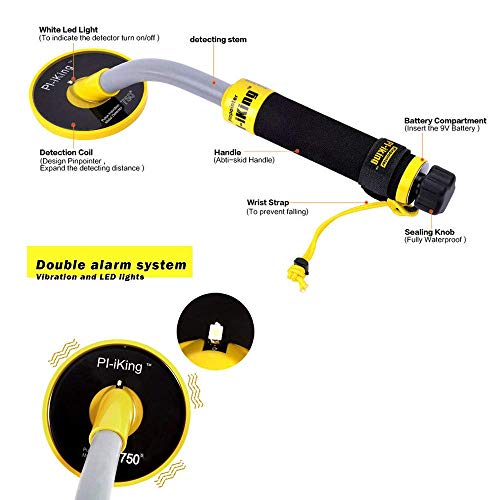 The TOPQSC Underwater Metal Detector Pinpointer is heading in the right direction to becoming a great product. A few tweaks and there’s no doubt it would be nearer the top of this best pin pointer list.

Whichever Pinpointer you choose to purchase from this list will no doubt boost your metal detecting experience and help you find those hidden treasures faster and with ease and accuracy.